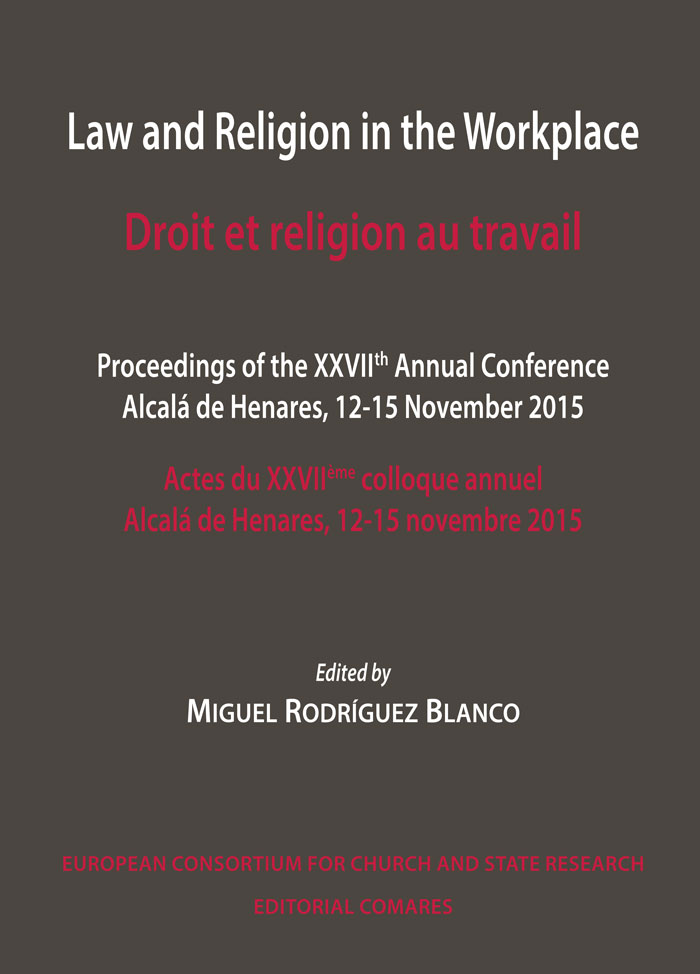 This volume contains the proceedings of the XXVIIth Annual Meeting of the European Consortium for Church and State Research, held in Alcalá de Henares during the days 12-15 November 2015, about the topic “Law and Religion in the Workplace”.

The conference was divided in five working sessions. Each session was introduced by a paper, making a comparative pan-European analysis, and suggesting themes for group discussion. These papers are published in the first part ot this book: 1) Religious freedom at work; 2) Religious ministers and labour law; 3) Autonomy of churches and human rights of the workers; 4) Religion in the workplace in the case-law of the European Court of Human Rights; 5) Indirect discrimination and reasonable accommodation in the manifestations of religion in the workplace.

The second part of the book contains the national reports delivered from participants from the European Union countries. The reports gave responses to the following questions addressed in the grille thématique distributed among the delegates:

a) What are the key instruments or sources of law on religious freedom at work in your country? What are the key elements of this law? How is religion defined? Are non-religious beliefs protected?
b) Which manifestations of religious beliefs are protected?
c) What is the rationale of the approach? Is it ‘equality’ or ‘religious freedom’ or both or is there some other foundation?
d) What effect, if any, has the jurisprudence of the European Court of Human Rights had in the national approach?

III. Autonomy of churches and human rights of the workers
a) In what terms is the autonomy of churches recognized in your country? Is it considered a manifestation of the collective dimension of religious freedom?
b) Are churches exempted from the general norms concerning anti-discrimination? To what extent?
c) What effects, if any, has European Union law had in this area?
d) What case-law has developed in this area?

I am pleased to record my gratitude to the institutions and entities which have contributed to the XXVII Annual Meeting of the European Consortium for Church and State Research: Universidad Internacional de La Rioja, Universidad de Alcalá and Banco Santander-Universidades. The meeting was planified as a central activity of the research project DER2013-45649-P. This project, funded by the Spanish Ministerio de Economía y Competitividad, has supported also the publication of this book.